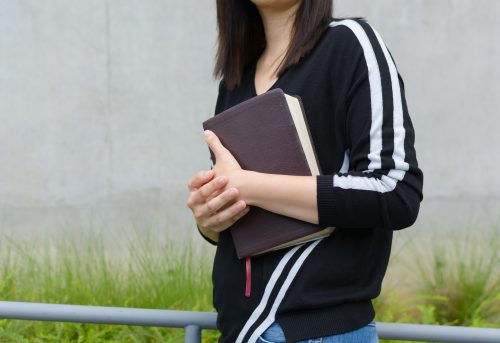 I've always been a go-getter, confident and self-assured. Coming from a poor family only made me more determined to live the Singapore dream of owning the 5 'C's and climb up the social ladder. And although I began attending church after I got married and was even baptized in 2011, life was still very much about trying to attain a certain standard of living and making sure that my children would not lose out to their peers due to a lack of means.

Then in May 2016, about a week after a minor road accident, I began to experience neck pain, headaches, and dizziness. My vision became blurry, and I became very sensitive to light and sound. Initially, I was told I was suffering from a whiplash. But when I didn't get better and further medical examinations and tests, including X-rays and CT scans, did not reveal any internal injuries, I was diagnosed with post-traumatic stress disorder (PTSD). My sleep was so badly affected that it only caused my health to deteriorate further. Desperate to understand what was going on with me and find a cure to all my health issues, I sought help from specialists, allied health professionals, Traditional Chinese Medicine (TCM) physicians, and even alternative medicine practitioners. Alas, nothing worked and I could find no respite.

By 2017, my life had been turned upside down. I stopped going out on my own because I felt so unsure of myself due to my blurred vision and the constant feeling of dizziness and unsteadiness. Even at home, I was incapacitated as I was always feeling weak and fatigued. I felt so helpless and alone, as no one was able to understand what I was going through. I hated the fact that I could not be of help to anyone but instead had become a burden to my family. My frustrations with myself made me irritable and short-tempered. I would lash out at anyone who happened to be around over perceived slights, minor issues or simply when things didn’t go my way. Unfortunately, that often also happened to be my husband and children.

Unbeknown to me, I had slipped into a depression. Ashamed of myself, I avoided meeting people and withdrew further into myself. I could find no joy in anything and had no desire to do anything. Life had become meaningless and I was going through each day like a zombie. My mind was so filled with dark thoughts that I attempted suicide as a way to seek relief from my sufferings. I was angry with God for allowing all these to happen to me. How could a God who professed to love me see me suffer and not do anything to help me? When even God had forsaken me, what hope is there?

But God’s thoughts are not our thoughts, and His ways are higher than our ways. When my mum had a relapse of cancer and was given 3 months to live, I was forced to look beyond my own troubles. Visiting her and looking after her needs helped me to stop wallowing in self-pity and to step out of my own self-imposed prison. Making plans for the eventuality of her death also opened up the opportunity to witness to my dad, who, in God’s perfect timing and grace, accepted Christ before my mum died. God used my mum’s death to open my eyes to see His love, expressed through His Church. He had sustained me with His strength and preserved me throughout the entire ordeal, even when I had believed Satan’s lies and denied Him.

Today, strained relationships with my family and friends have been restored and new relationships with God’s people and others have been established. I live life one day at a time and am more relaxed, having accepted that many things are beyond our control. Indeed, all things work together for good to those who love God, to those who are the called according to His purpose.