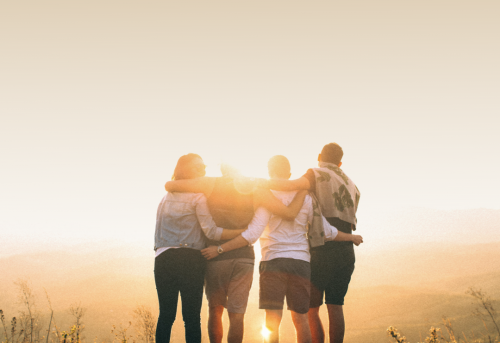 “Therefore, God gave them up in the lusts of their hearts to impurity, to the dishonoring of their bodies among themselves, because they exchanged the truth about God for a lie…” - Romans 1:24

When man denies God, God gives man over to the lusts of his own heart. This ‘giving over’ is not the act of a hapless parent who has given up on a persistently rebellious child. Rather it is a holy act of judgement towards the stubborn rebellion of man.

When God gives man up, he holds back His restraining grace and allows man to be consumed by the immorality of his own heart. And when sexual lust is unrestrained, man slips down further into the sin of homosexuality. The Bible describes homosexuality not as a proper alternative lifestyle, but a spiritually disordered lifestyle. Whilst there may be predisposing factors to being homosexual, scripture teaches that it is not primarily a medical, biological or social problem. The Bible clearly teaches that it is a spiritual problem. God’s intention was Adam and Eve (Genesis 2), not Adam and Steve! But people choose a homosexual identity and lifestyle because of the moral darkness in their hearts.

The world may tell you that being homosexual is in your genes and that you have no choice. But this is a lie from the pit of hell. The gospel is the hope for every sin, including a sexually disordered life. Jesus died for homosexuals as much as he died for the liar, the murderer and the adulterer. You don’t have to be gay, bi-sexual, lesbian or transsexual. You don’t have to remain in sexual sin. You can be washed, cleansed and justified by Jesus Christ.

Followers of Jesus Christ, we need God's compassion to journey alongside those who struggle with these same-sex desires. Let us not despise them with scorn, but love them to the cross of Calvary. Same-Sex desires is not an incurable cancer. But it stems from the same spiritual cancer that drives every sinful desire. Only with the gospel of Jesus Christ, can all sinners hope to live and pursue a holy life for God's glory.